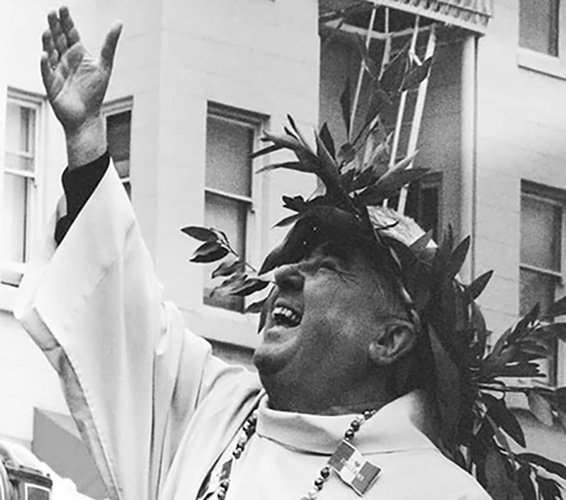 Lorenzo Petroni, founder of Petroni Vineyards, had somehow persuaded the Italian Brunello Consorzio, an organization dedicated to protecting the regional integrity of this wine, to allow him to use the name on his Moon Mountain Sangiovese. That story, however, is better told in person. Lorenzo’s dream was to produce a California Sangiovese to rival the famed and coveted Brunello di Montalcino from the Tuscan region of Italy. Born in a small village outside of Lucca, he left home at the age of 17 with just a couple dollars in his pocket and a woman’s pant suit from his mom, who explained that “once he found a job, he could find a tailor and look the proper part.”

to get to San Francisco. Once he arrived, he began working as a dishwasher and busboy in North Beach, the City’s Italian quarter, slowly working his way up the ladder. He was a hard worker, saving his money and not many years later, founded The North Beach Restaurant with a friend of his, Bruno Orsi, who was to be the restaurant’s chef. Lorenzo, an incredibly charismatic and welcoming Italian soon earned the title “Mayor of North Beach” and is well known for hosting SF’s finest for lunch, heated political conversations and late-night Grappa tastings in the basement of the restaurant, which is also boasts the grandfathered-in ability to cure its own prosciutto. He was the first among restaurants in the area to put tables outside his establishment, just like in his home country. His patrons loved watching the Columbus Day Parade from the front row of the restaurant while Lorenzo, who was dressed as Bacchus, handed out wine to passersby.

On weekends, he and his wife, Maria Elena, loved to escape the hustle and bustle of the City for Sonoma Valley, which reminded them of Tuscany. It was here he found the perfect piece of land for growing his beloved Sangiovese vines. They acquired the property and spent almost 30 years developing and cultivating the varietal, whose vines were smuggled over in suitcases in Italy. Lorenzo loved the mantra “it’s easier to ask for forgiveness rather than permission.”

in her husband’s honor of producing Sangiovese in the exact style of the Brunello produced in Montalcino. In fact, Lorenzo even persuaded the Italian Consorzio del Vino, an organization dedicated to protecting the regional integrity of this wine, to allow him to use the name. That story, however, is better told in person.